We have discussed the effects of stress on the human body as a whole, but what most people forget to consider are the women who are pregnant.  Yes stress affects them just as it does the non-pregnant woman, but did you know that it can also have an effect on pregnancy and the unborn baby?  It’s true, and it’s enlightening.  This research has prompted many feelings for me, as my 4 year old has gut and speech issues that have “no medical reasoning.” His pregnancy was during a time of my life when I was battling stress more often than not.  Let’s just say that the hours of research I’ve read through leads me to better understanding my son’s issues.

Research shows that stress experienced by a woman during pregnancy may affect her unborn baby as early as 17 weeks after conception, with potentially harmful effects on brain, gut and overall development.

Pregnancy in itself is a stressful time on a woman’s body. The normal physical and hormonal changes can be quite daunting, but the reality is that excessive stress during pregnancy can have some severe consequences for the health of an unborn baby if it is not managed. It’s already known that extreme stress during pregnancy can lead to increased risk of miscarriage in early pregnancy. In the later stages of pregnancy, extreme stress can lead to premature labor, premature birth and low birth-weight babies. But more than that, the latest findings indicate that prenatal stress can also increase the risk of a baby being born with asthma or allergies, and so many other lifelong challenges.

Cortisol, the stress hormone, naturally increases 2 to 4 fold in pregnant women. Cortisol is passed through the placenta to baby, but the amount of maternal cortisol that crosses the placenta barrier is limited because its passage is regulated by the enzyme 11B-hydroxysteroid dehydrogenase.  Maternal cortisol does still account for 30-40% of fetal concentrations of cortisol.  http://www.ncbi.nlm.nih.gov/pubmed/11231985

Women under higher than normal stress levels, chronic stress, or stress that is not handled well are unknowingly exposing their babies to increased levels of cortisol.  These maternal cortisol levels can affect birth and infant outcomes in multiple ways. For one, cortisol stimulates the synthesis and release of placental corticotrophin-releasing hormone (pCRH). In humans, elevated cortisol early in pregnancy predicts pCRH levels later in pregnancy, and pCRH predicts preterm birth. Maternal cortisol also acts directly on the fetus and its developing nervous system. For example, results of some studies have documented that relatively high levels of prenatal maternal cortisol predict: 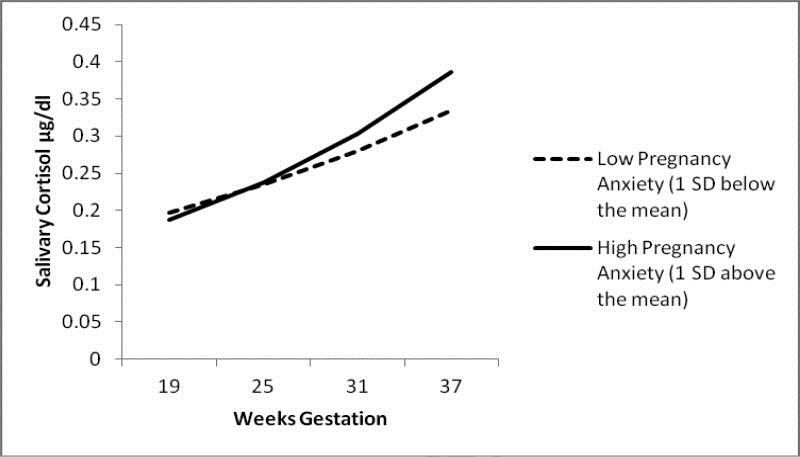 Stress during the first trimester of pregnancy alters the population of microbes living in a mother’s vagina. Those changes are passed on to newborns during birth and are associated with differences in their gut microbiome as well as their brain development.

According to research presented in 2013 by the Society of Neuroscience, “features of the mother’s vaginal microbiome were altered by stress, and in turn, changes were transmitted to the offspring’s gut.”

During a vaginal birth, a newborn is exposed to its mother’s vaginal microbes, collectively known as the microbiota, which importantly colonizes the newborn’s gut, helping its immune system mature and influencing its metabolism. These effects take place during a critical window of brain development.

Tracy Bale, senior author on the study and a professor of neuroscience in Penn’s School of Veterinary Medicine and Perelman School of Medicine states:

‘As the neonate’s gut is initially populated by the maternal vaginal microbiota, changes produced by maternal stress can alter this initial microbial population as well as determine many aspects of the host’s immune system that are also established during this early period.’

These findings not only highlight the important role that the mother’s vaginal microbiome has in populating her baby’s gut at birth, but also the profound effect of maternal stress experience on this microbial population and on early gut and brain development.

A study released in March 2015, utilized the information provided by baby’s first blood draw (heal prick) after birth shows that infants whose mother’s cortisol levels were consistently higher than normal early on in pregnancy, had higher than normal cortisol levels themselves.  These infants displayed a much higher sensitivity to stress than other babies with lower cortisol levels.  As these babies grew into toddlerhood, they exhibited heightened levels of anxiousness compared to other children, and by the time they were six years old, MRI scans revealed their amygdala (the section of the brain associated with the human response to frightening stimuli) were larger than normal. http://www.newsweek.com/how-calm-your-anxiety-during-pregnancy-315242 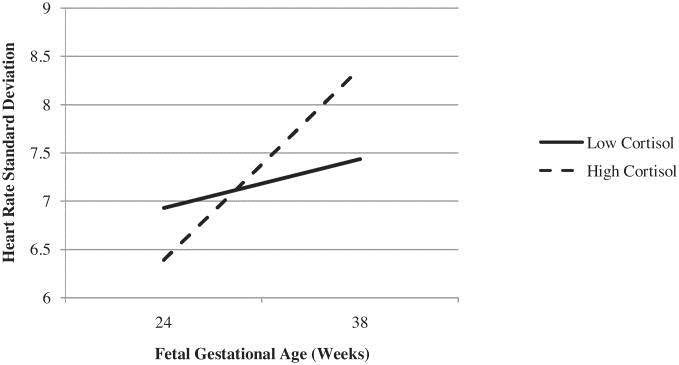 The intelligence of more than 100 babies and toddlers whose mothers had suffered unusually high stress in pregnancy was studied, and in January 2015, results were released showing their IQ’s were generally about 10 points below average.  Many of these small children also had higher than average levels of anxiety and attention deficit problems. http://www.theguardian.com/science/2007/may/31/childrensservices.medicineandhealth

Numerous studies have found that males appeared most affected and may have implications for the development of disorders such as autism and schizophrenia, both of which disproportionately affect males in our society. 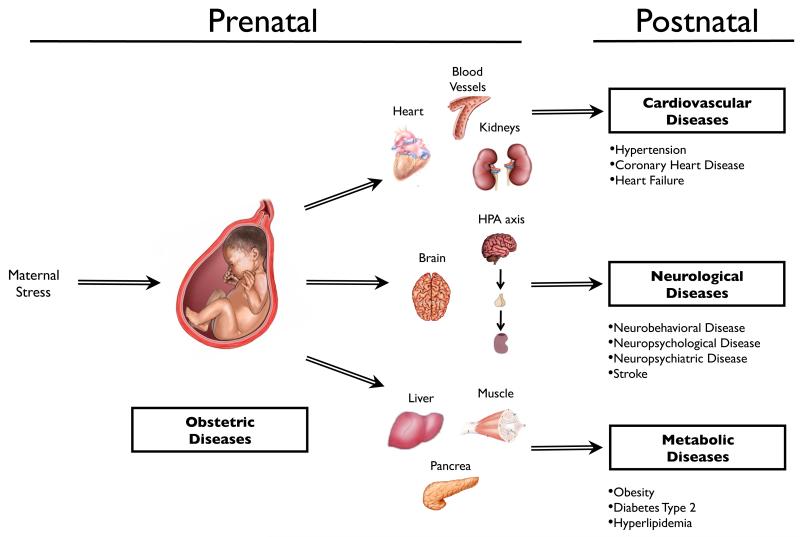 The brain development is strongly compromised by maternal stress.  Expression patterns of key functional mediators that contribute to the heightened susceptibility of neonatal HIE (Neonatal hypoxic ischemic encephalopathy is a devastating disease that primarily causes neuronal and white matter injury and is among the leading cause of death among infants.) The response of these mediators may be stress-specific. 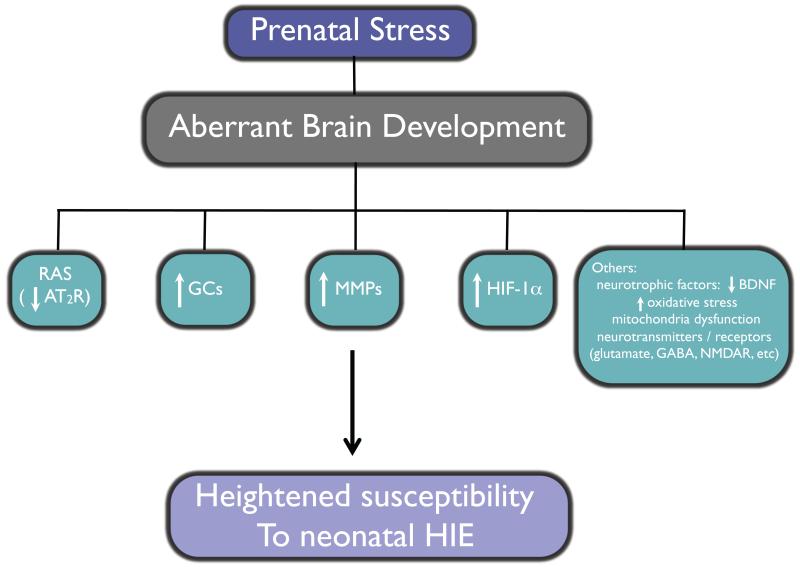 Other Possible Effects of Stress: http://www.ncbi.nlm.nih.gov/pmc/articles/PMC3404248/

Asthma and Allergies:  Babies born to mothers who are experiencing extreme stress levels had more immunoglobulin E (IgE) in their blood at birth than babies who are born to mothers with normal stress levels. IgE is an immune system compound (antibody) that indicates an immune system response. This suggests that these babies would be more likely to have asthma or allergies because IgE is an antibody involved in allergic and asthmatic reactions. Obviously this is not conclusive as there are many other factors that determine whether a child will be asthmatic or allergy prone but certainly elevated IgE is suggestive of an increased risk.

Enhanced vulnerability of neonatal hypoxic-ischemic encephalopathy: Studies indicate a close link between prenatal stress and enhanced risk of development of cardio-metabolic syndrome, stroke, neuro-behavioral, neuropsychological and neuropsychiatric pathogenesis in adolescence and/or adulthood. However, little research shows the potential harmful effects of fetal stress on the susceptibility of neonatal HIE. Given the impact of prenatal stress on programming of brain structures and functions as discussed above, it is possible that fetal stress may induce the sensitive phenotype of HIE in the neonatal brain through reprogramming expression patterns of some key functional genes and/or proteins involved in the pathophysiology of HIE. More research needs done in this area.

The most common forms of stress that pregnant women noted:

It is vital that pregnant women are given adequate support and reassurance from their family, friends and employers, to ensure they have a happy and healthy pregnancy.

Stress is going to happen.  It is inevitable.  But how one handles the stress is what seems to be of importance.  Working through it before it becomes ongoing and overwhelming will help lower the chances of any maternal stress-related complications.