It’s time to purchase ALL.THE.CANDY. I mean, it’s for the trick-or-treaters, right?  Of course it is.

Whether your children dress in costumes and fill buckets with candy or you choose not to celebrate the holiday, inevitably, the candy somehow still ends up in your home.  Before you allow your children “a few harmless pieces,” take the time to learn the consequences of your actions.  I am not totally ruining candy for you.  There are plenty of great premade, purchasable candies out there, and a plethora of healthier homemade recipes to meet every candy craving. 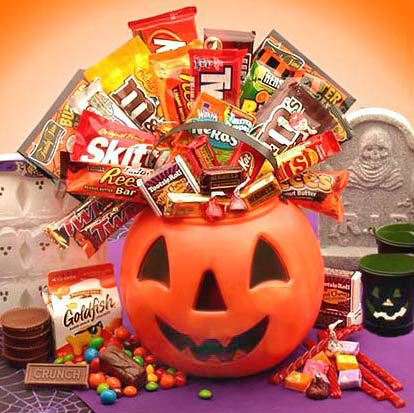 From Kit Kats and Reeses to Candy Corn and Candy Bars, I took the top purchased candies and broke down their ingredient lists.  This is what I found.  The most common ingredients are:

High Fructose Corn Syrup:  Also labeled as corn syrup, maize syrup, glucose syrup, fructose syrup, tapioca syrup, dahlia syrup, fruit syrup, and crystalline fructose. Corn syrup is derived from genetically modified corn.  It “is heavily processed, using enzymes to turn cornstarch into glucose and then fructose.”   Even though glucose and fructose occur in nature, HFCS does not occur in nature. Cornstarch is converted to glucose, some of which is then converted to fructose. If a substance’s molecular structure has been changed in a factory, it can’t be considered natural.

A few documented reasons to stay away from HFCS include its links to obesity, diabetes, tooth decay, high cholesterol and increased risk of heart attack and heart disease. Additionally, regular consumption of corn syrup may lead to anemia, weakened immune system, fatigue, mood swing and suppressed metabolism. Particularly sensitive individuals may also experience light-headedness or headaches and bowel issues.  (A safe, healthy option: look for honey as an ingredient. It is also known that consuming raw milk combates the side effects of HFCS. http://www.earthclinic.com/cures/corn-syrup-side-effects.html )  http://www.thebetterhealthstore.com/Newsletter/100110_High-Fructose_04.html

Natural or Artificial Flavors: “natural flavor” is the fourth most common ingredient listed on labels – not just in your candy. This is a BIG umbrella folks.  Companies can label absolutely any ingredient, whether it is synthetic, chemical, etc as a “flavor” as long as it is generally regarded as safe by the FDA. The most common ingredients labeled as “Flavors” are as follows, and you may see some of these listed on their own on a label, but if you don’t, do not be surprised if they are in the product.  http://www.livescience.com/   http://www.foodadditivesworld.com/

Artificial Colors: (See above for specifics)

Emulsifiers: linked to irritable bowel syndrome, disruption of the gut, and obesity.

Nitrites (and nitrates): Synthetic and highly toxic. In fact, these ingredients have been highly linked with a number of deadly cancers.

Hydrogenated palm kernel oil: Besides being linked to deforestation through the plantations creating this oil, palm oil was found to impair the digestive systems of mice during studies. http://humanfoodproject.com/

Preservatives: There is no shortage to the amount or types of chemicals put in our food today, and one of the top things added to our food are preservatives. These chemical ingredients, such as TBHQ and/or BHT and BHA are man-made chemicals that do preserve food for longer, but at a great expense to our health. Preservatives have been linked with a number of problems such as allergies and sensitivities, digestion problems, mental problems such as ADHD and depression, as well as cancer.

TBHQ: The most common food preservative.  Tertiary Butylhydroquinone is a petroleum-derived form of butane.  It is commonly found in lighter fluid (Oh and Butterfingers… and other of your Halloween goodies.)  5 grams of TBHQ is lethal and the FDA ruled that quantities larger than 0.02% could not be used. (RUN AWAY FROM THIS!)

Alternative Sweeteners: For those who are diabetic or otherwise trying to cut down on their sugar intake, food manufacturers have created “sugar free” options that have no sugar.  Instead of using sugar, they have replaced it with a non-nutritive, synthetic sweetener. These sugar replacements, such as aspartame, splenda, sucralose, and/or Ace-K act similarly to flavor enhancers in the body, in that they stimulate cells and cause cellular death. These artificial sweeteners wreak havoc in the body and can actually still lead to weight gain and cravings.

Shellac:  The shiny coating on your candy labeled “confectioner’s glaze.”

Castoreum: An extract from beaver perineal glands and beaver urine typically considered a “natural flavoring.”  You’ll find this in anything berry or vanilla flavored.

Gelatin: a thickening agent made from the protein collagen, which is extracted from animal skin and bones.  You will find this in your gummies.

We need to shift our focus from specific harmful ingredients to the food itself: where is this food coming from, how is it being processed, and most importantly, is it even food?

The good news:  There are companies providing high-quality candy.  My personal favorite place to shop:

(I am not affiliated with the above site, I just have a child with gut issues, speech delay, sensory processing disorder, food allergies, and food sensitivities.)

Just for a chuckle: This is how we feel on Halloween 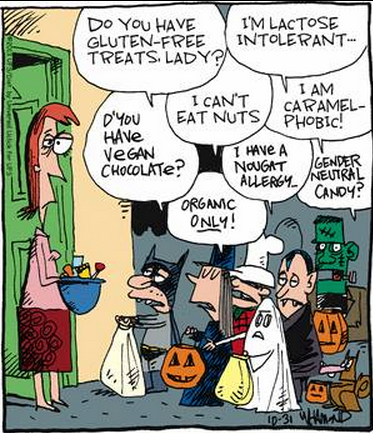