Hormonal Birth Control: What You Need to Know.

From www.kidshealth.com (Yes, you read that right: KIDShealth) about birth control pills:

“Hormones are chemical substances that control the functioning of the body’s organs.”

Where do I even start?  There is absolutely nothing okay with this statement. How are women, and TEEN women, still given these pills daily?

The birth control pill was approved by the FDA in 1960.  Regarded as a hero drug among women, the pill gave women the freedom to have sex without worrying about becoming pregnant.  Very few people questioned the side effects and risks of hormonal birth control, and still today, the pill is given as a “right of passage” to most teens. Yet, study after study leads us down a road of questions and worry.

The quote above is completely accurate.  Hormones ARE chemical substances.  The body produces them regularly and maintains a natural balance that allows the organs to function as they are meant.  Estrogen and progestogens are essential steroid hormones. In women, they are required for normal development of female sex organs and secondary sex characteristics, regulation of the menstrual cycle and reproduction, and many other essential physiological functions in the bones, brain, breasts, adipose tissue, and uterus. Synthetic versions of these hormones (estrogen and progestogens) placed in the body then overthrow the natural balance and take control of the organs, tricking and manipulating them into functioning in different ways than they should.

There are several forms of hormonal birth control, all with similar risks and side effects.  Remember that none of the hormonal contraceptive options protect against sexually transmitted diseases or HIV.

Mini-pill: These are like conventional oral contraceptives, but contain no estrogen, making them safer, but also less effective.  Often recommended to women who are breastfeeding, the mini-pill may effect milk supply and can still produce many side effects.

Depot medroxyprogesterone acetate (DMPA):  An injection, the “depot shot” was approved by the FDA in 1992 and quickly became popular due to its non-daily methods.  An injection is administered once every 12 weeks and contains medroxyprogesterone acetate, polyethylene glycol, sodium sulfate anhydrous, and myristyl-gamma-picolinium chloride (as a preservative).  http://www.rxlist.com/depo-provera-drug/patient-images-side-effects.htm

NuvaRing: A combined hormonal contraceptive, this vaginal ring is inserted once a month and removed to bring on a menstrual cycle. 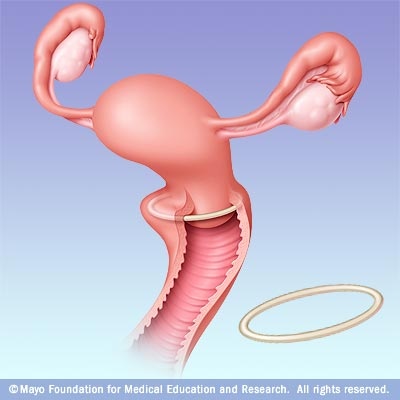 Contraceptive Implant: An implant the size of a matchstick can be placed under the skin of the upper arm. It releases progestin slowly.  It can be left in place for three years.

Contraceptive Patch: Ortho-Evra is the only FDA approved hormonal contraceptive patch.  It contains the hormones estrogen and progestin, and is applied to the skin once a week for three weeks. On the fourth week, no patch is used, allowing menstruation to occur. Recent studies have shown that Ortho-Evra causes a higher level of estrogen to circulate in the body than do combination birth control pills. As a result, you may have a slightly higher risk of estrogen-related adverse events.

Other possible side effects to the above mentioned forms of contraceptives:

Types of Estrogens Will be Listed As:

Types of Progestins Will be Listed As:

Many epidemiological studies have shown that prolonged exposure to estrogens may increase the risk of breast cancer. 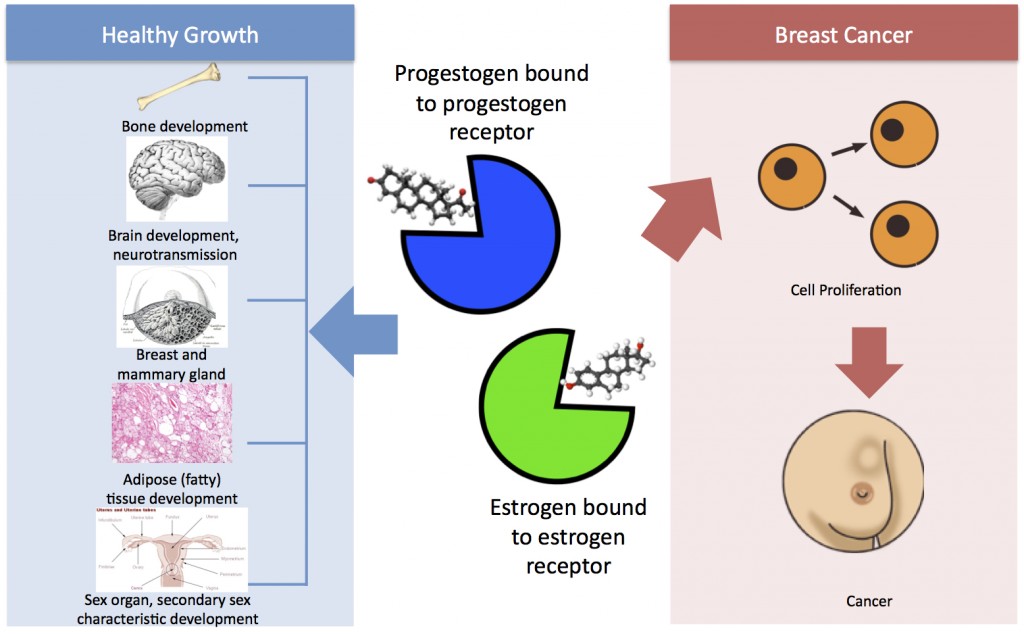 Hormonal birth control and breast cancer: A recent study compared 1,102 women between the ages of 20 and 49 diagnosed with breast cancer, whose birth control pill usage histories (including does information) were obtained using electronic pharmacy records. The study showed that current and recent pill use increased the relative risk of breast cancer by 50% overall.  The risk was highest with high (170%) or moderate doses (60%) of estrogen and certain formulations of progestogen (up to 210%)  SOURCE

The study also showed that the risk conferred by longer duration of use and by more recent use was significantly higher for triple-negative breast cancer. Several other studies have shown similar results.  SOURCE and SOURCE

Since women taking the pills tend to be younger, the combination of findings that the pills increase breast cancer risk with current and recent use and increase the risk of triple-negative breast cancer make it more troubling, especially with the increase in breast cancer diagnoses in young women.

Estrogen in Our Water:  Even if you are not taking hormonal birth control, there is still cause to worry.  Over the past decade, we have learned about the increasing percentage of hormones being found in our water supply.  Studies have found that women on hormonal contraceptives are urinating estrogenic compounds into the water, ans these hormones are not then filtered out.  The cycle is as you think: we all then consume these.  Estrogenic compounds are part of a larger category of chemicals known as endocrine-disruptors (EDCs), chemicals that can alter the hormonal and homeostatic systems enabling an organism – like a human being or other animal – to communicate with and respond to its environment.  We are witnessing puberty beginning younger and younger in our children, and watching cancer rates increase.  Hormones in our water are playing a role in this.