It is becoming a more common site:  babies wearing helmets, or babies without helmets, but with a noticeable flat portion to the back of their heads.  You stare for a moment and look away, but you are wondering what the cause is and how you can avoid this with your infant.  There is also the possibly that you are experiencing this right now and want answers.  I’m going to break down the science of what has happened, or could happen, the history behind it all, how to prevent, and ways to treat the problem.

Let me start with this:  Infants should not have flat heads.

Before I dive into cranial malformations, known as plagiocephaly, let me first brush upon Infantile Idiopathic Scoliosis (IIS).  IIS is scoliosis in children under 3 years of age.  While you may not think it has anything to do with plagiocephaly, there is a link.  IIS was a rare phenomenon in past decades; however, in the last 15 years, authorities in the field of scoliosis have noticed a steady increase in children with this condition.  Many researchers have taken this a step further and linked a relationship between IIS and cranial malformations.  The link is this: an infant being laid in the supine sleeping position, on their backs.  In 1993, Canada and many other countries around the world began recommending that infants be placed to sleep on their backs, and this was later reinforced with the “Back to Sleep” campaign. The incidence of Sudden Infant Death Syndrome (SIDS) in Canada subsequently declined by 50% between 1999 and 2004. Obviously, the reduction in SIDS is wonderful, and I am not advocating a return to the prone (belly) sleeping position.  But within two years of the recommendation, there was a six-fold increase in the cases of plagiocephaly. This is research that needs to be noted, and there are changes that need to be made.

Interesting though, when babies spend time in the prone (belly) position, IIS and cranial malformations are significantly reduced.  While this contradicts SIDS information, it does explain why, when babies are not asleep, they need to be held, worn, experience tummy time, or other options that do not include being on their backs.  http://www.canadianchiropractor.ca/patient-care/the-rise-in-infantile-scoliosis-2301#sthash.uPlDTj0S.dpuf

Studies also show that 16% of babies, mostly male, are found to have torticollis.  Congenital muscular torticollis can be present at birth or develops soon after. It is usually discovered in the first 6 to 8 weeks of life, when a newborn begins to gain more control over the head and neck. With tortocollis, the infant is unable to turn his head away from the affected area, which over time may cause mild facial asymmetry, range restriction of the neck, delayed development of postural control, and alteration in visual gaze to one side.  Physical therapy involving stretching or deep neck massage may be needed. Prior to physical therapy, it is important to obtain cervical x-rays to rule out structural abnormalities. Surgical release of the sternocleidomastoid muscle is done only as a last resort if other therapy fails. Torticollis shows in the form of a shortened neck muscle, and can be seen easily by the parent or pediatrician.  A specific cause is not known, but is assumed to be non-ideal positioning in the womb.  Chiropractic care can also help greatly.  The larger problem occurs when these newborns are then sleeping in a supine position (on the back), and are spending extra time throughout the day in this position.  They are then at higher risk of developing deformational posterior plagiocephaly. Identification of affected infants may allow early implementation of positioning recommendations or physical therapy to prevent the secondary craniofacial deformations that are part of this increasing problem.  http://adc.bmj.com/content/93/10/827.short and http://www.ncbi.nlm.nih.gov/pmc/articles/PMC1595182/#citeref13 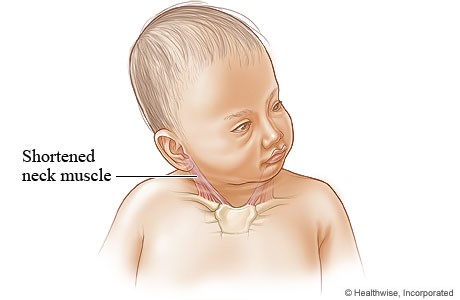 Historically, a dolichocephalic (elongated) head shape was always the norm. Currently the norm has changed to a more brachycephalic (shorter and broader) shape. Since the American Academy of Pediatrics’ “Back to Sleep Campaign,” the incidence of positional plagiocephaly has increased dramatically with a concurrent rise in the incidence of torticollis.

Infants who require NICU care, and particularly premature infants, are more prone to positional plagiocephaly and dolichocephaly. This is because they spend days, weeks, or longer being laid on their backs. Both can be prevented or minimized by proper positioning. http://journals.lww.com/advancesinneonatalcare/Abstract/2005/12000/Impacting_Infant_Head_Shapes.11.aspx

Another interesting fact is that the incidence of cranial flattening is 13% in singletons and 56% in twins. Risk factors include: http://www.ncbi.nlm.nih.gov/pmc/articles/PMC1595182/

It is important for parents to be informed about the importance of supervised prone (belly) playtime to enhance the development of early motor skills.  Parents also need to be aware of their infant’s head position preference and remember to alternate head positions when putting the infant to sleep. This is even more important when cranial flattening is noticed immediately following the birth of an infant.

If plagiocephaly is left untreated, the infant can have prolonged developmental delays. It can also cause abnormal occlusion, temporomandibular joint difficulties, and strabismus. Any altered physical appearance, without treatment, may be permanent as well.

In most cases of plagiocephaly, the condition is self-resolving. A study found plagiocephaly to be present in 20% of 8 month-old infants, but that by the age of two years, this number had decreased to 3%.

A helmet called a thermoplastic orthotic device involves the use of thermoplastic materials that can be molded directly onto the infant’s head. The device is lined throughout, using a soft material to protect the skin of the infant. It is light, comfortable, and tolerated well by the infant This method of treatment is most effective if used between 4 and 12 months of age and involves the infant wearing the helmet for several months with weekly adjustments made by a technician. http://www.ncbi.nlm.nih.gov/pmc/articles/PMC1595182/#citeref23

Again, chiropractic care can aid in the treatment of flat head syndrome, as well as in the prevention of it.  Please do not hesitate to take action if you feel as though your infant is showing signs, as you do not want motor skills to be effected long term.